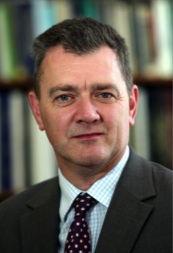 Chris was an inspirational scientist and led our National Research Network with colossal drive and enthusiasm.

Chris was a fantastic person to work for and anyone having the pleasure to meet or work with Chris will know of his genuine passion for science and for life.
Chris is greatly missed by his friends and colleagues involved with the Network, both internationally and those of us in Wales.

The Network and School of Pharmacy held a memorial event on 14th February 2017, which celebrated Chris’s life and work.

The three remaining members of Chris’ group in the School of Pharmacy and Pharmaceutical Sciences, Cardiff University, have published a review paper as a tribute to Chris:

“Chris’ family have lost a loving and devoted husband and father. The University has lost a distinguished researcher. The world has lost an inspirational leader in drug development. I have lost a dear, dear friend. However, his legacy is inextinguishable, and he will continue to inspire generations of researchers.”

“Many of us have lost a friend as well as a colleague and mentor. So wide was Chris’s influence in the School, the University, Wales and beyond that there will be many personal tributes paid. I have had the privilege of working with a man whose scientific achievements and personal attributes were inspirational.

“I had the privilege to work with him briefly and he was an amazingly positive and inspiring colleague.”

“Professor McGuigan brought great distinction to his discipline and to the University and will be missed by all his colleagues across the University.”

“He was a distinguished scientist and was well respected at government level in Wales. He made a huge contribution to Cardiff’s success in the last REF.”

“He really was a force of nature – so driven, focused and enthusiastic whilst at the same time, he was generous, thoughtful and always made time for others – a very very rare combination of human attributes!”

“What a loss, a wonderful scientist but more importantly a great human being.”

“We have lost a good friend and an inspirational colleague.

The world of science and medicine has lost a pioneer and a brilliant innovator.”

“Chris was an amazing guy, encompassing intelligence, amazing dynamism and a clear vision. He will be missed by many throughout Wales and beyond. The work he did to establish the NRN Life Science network and its burgeoning legacy will be a fitting memorial to him.”

“In the short time I worked with him, I quickly learnt that he was a remarkable man, and had a truly courageous spirit. Every time we met I was so impressed by his capacity to make those around him feel at ease and included.”

“Chris was such a nice person to work with, always receptive, full of energy and enthusiastic about new ideas. He was like a mentor for many of us. He made the NRN a friendly community to be part of.”

“Chris was not only an amazing scientist, but such an endearing person. He was an impressionable mentor for me.”